Wren Urban Nest is a beautifully crafted, brave new hospitality concept that promises guilt free luxury. It is a breath of fresh air in an industry that is otherwise crowded with generic copy cat concepts and brandjackers.

At the beginning of building a new business, the challenge with branding is nailing a unique and brave concept that no one is doing but everyone wants. From the start, the client was bought into our process and sustainable concept and amazing things can happen when a client is totally aligned in vision and purpose.

Whilst delivering Ireland’s most sustainable hotel was the brief for architects, it wasn’t envisaged that this would be the brand concept. We engaged with architects, BDP, and were wowed by their sustainable ethos right through from the materials chosen to the way the building would be powered. We knew then that we needed to weave this innovation into the brand story. 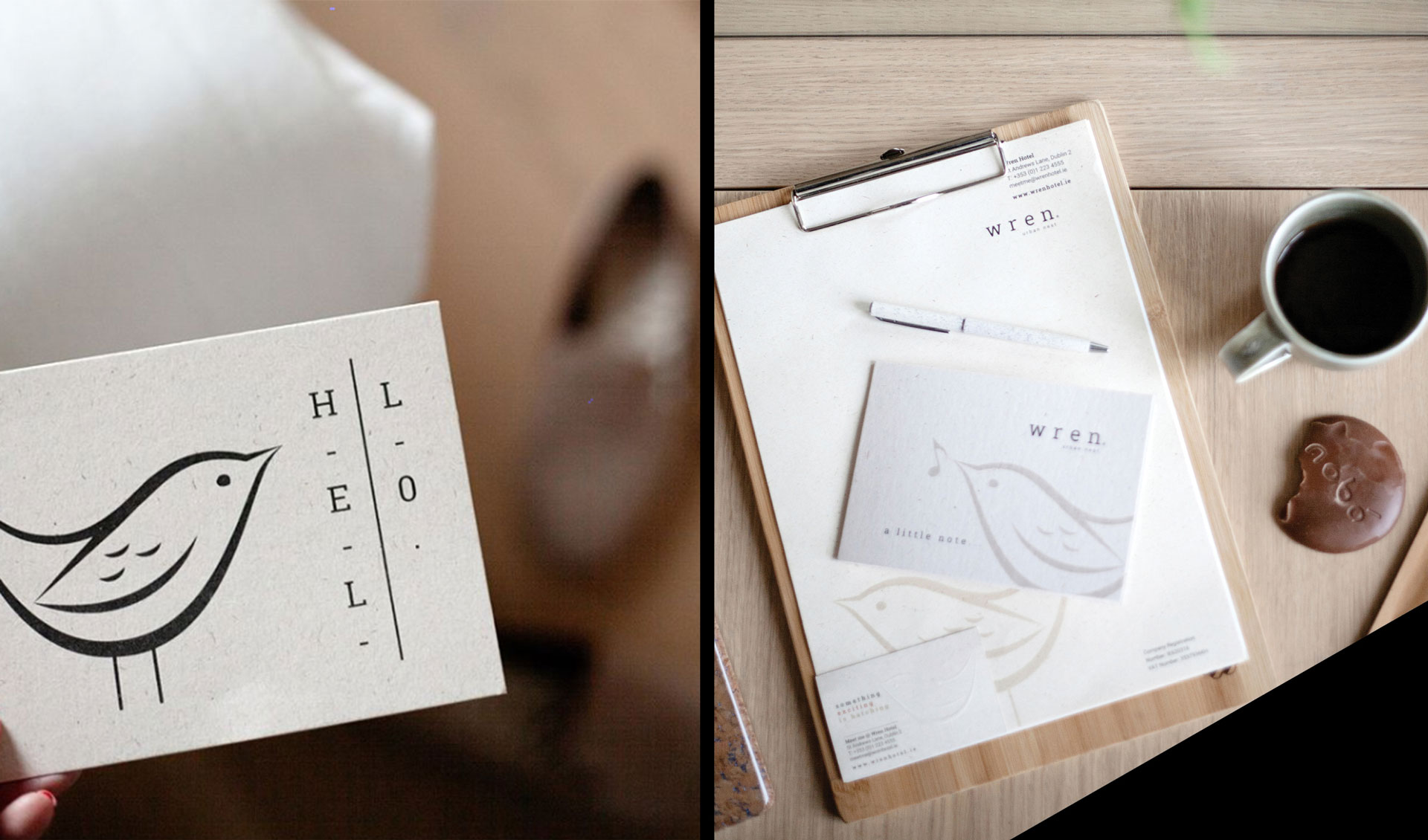 With all stakeholders focussed on delivering a bold and brave new concept we set to work with our 3 stage process. The initial exploration stage involved building insights with a full external review of the new business model to define the offering with a focus on: guest experience, new technology, smart luxury, F&B offering and market analysis. From this emerged our ‘Little Steps’ sustainable brand platform.

Then we identified the key brand comms & touchpoints. We listed all areas where consumers interact with the brand to understand purchase decisions and most importantly deciding how the new brand would need to perform at those touchpoints.

After the name and concept was agreed we set about crafting the Design Vision, Brand Story and Brand Values. The design vision inspires a brand’s look, feel, guidelines, principles, aesthetics and visual & verbal expressions. It provides a foundation for deﬁning a brand identity. It is a framework that enables a brand to have meaningful place in the cultural landscape so that it is instantly recognised. The design vision represents the DNA of a brand in the future and from this we crafted the building blocks. 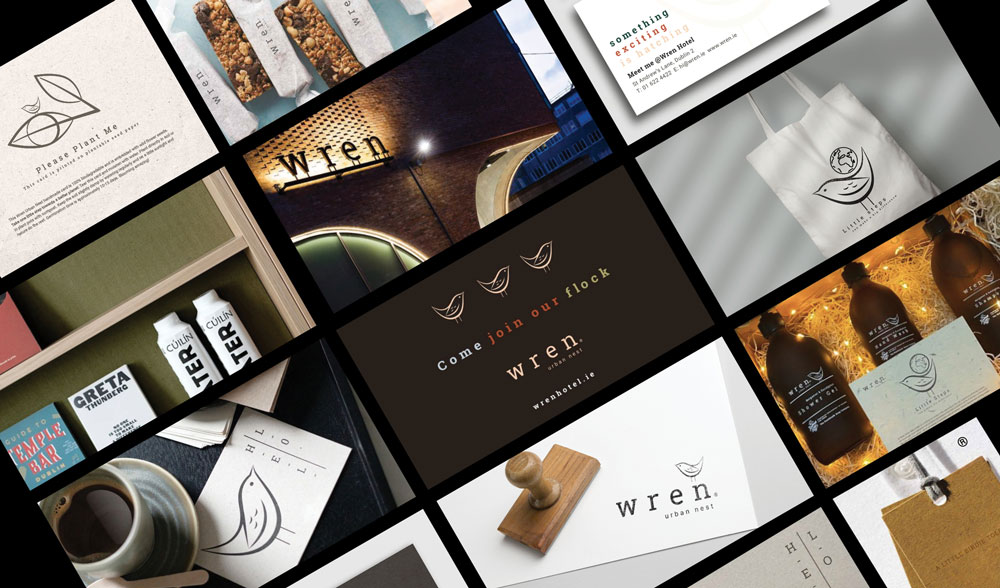 “The wren is a tiny bird. It’s also smart. In winter, dozens can huddle together for warmth. It weighs little more than a euro coin, but is hardy. In the battle to be king of the birds, legend says the wren hid under an eagle’s wing, overtaking it at the last minute to soar the highest.

You can see where Wren Urban Nest, a new hotel squeezing 137 rooms on to the site of the former Andrew’s Lane Theatre, is going with its branding. ‘Cosy’ and ‘Snug’ rooms are billed as 12sq.m and 10sq.m “nests” in the heart of the city. Wicker lightshades also evoke nests, and the little hub is taking a big swing at sustainability, claiming to be “Ireland’s most sustainable hotel”.  How you’d measure that, I don’t know. But it goes way beyond paper straws and encouraging us to reuse towels. The hotel uses 100pc renewable electricity, captures most of its heat, has an organic wine list and features oodles of local products. While the eagles aim for net zero carbon by 2050, The Wren has already achieved it, without purchasing offsets. Guilt-free getaway, anyone?”

This is one of the many lovely post launch media reviews. Wren Urban Nest was launched in the midst of the global pandemic and against all challenges the concept was met with rave reviews.

During the final stages of our exploration process we wanted to establish what success would look like. This was agreed to be a clearly defined brand positioning, well executed marketing strategy, direct web reservations in excess of 50% of all bookings with proof of concept eg. Low running costs & RevPar of x. and room occupancy above x% per annum. For this to be achieved our little Wren would need to be strong enough to stand out amongst international hotel groups and booking sites.

With average market occupancy levels at 20%-30%, within two months Wren saw occupancy levels of up to 80%. Glowing reviews featured in most of the national news and travel publications with praised heaped on the brand promise of guilt free luxury and the ambition of little steps towards a better planet.